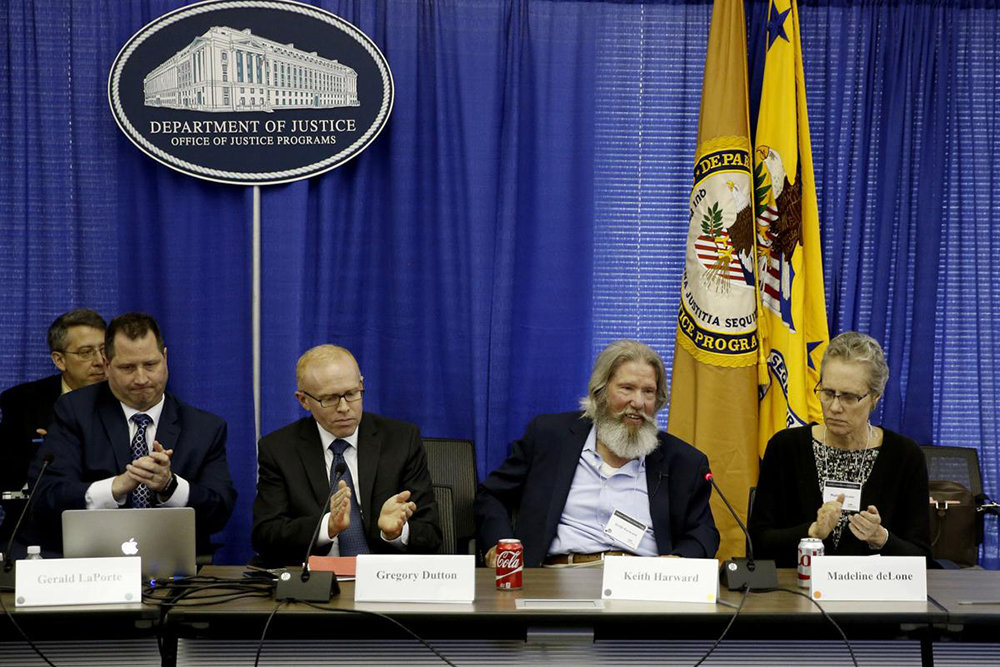 Below are suggestions for further reading materials on several of these cases, including from the actual trial records.

Keith movingly told his story, in a Q&A with Innocence Project co-founder Peter Neufeld, at an event we hosted at Duke Law in Spring 2019.  Watch the video.  Keith travels the county speaking out about the injustice of unreliable forensic evidence – Harward was largely convicted based on bite mark evidence in Virginia; he narrowly avoided the death penalty.  In a forthcoming book, “The Autopsy of a Crime Lab,” I detail sources of error in forensics and feature his case.  However, you can read right now the actual testimony at his criminal trial at the Convicting the Innocent DNA exoneration data site.  I also strongly recommend reading the Richmond-Times Dispatch series of articles, by Frank Green, telling the story of his case – coverage that helped to free him.

Kennedy Brewer and Levon Brooks were both wrongly convicted based on faulty bite mark testimony as well – they would also spend decades in prison, in Mississippi.  This detailed spreadsheet details misuse  of forensic evidence in the cases of the first 250 DNA exonerees.  You can also search here to read about other cases of people exonerated by DNA, but originally  convicted based on bite mark testimony. The Innocence Project team that worked on their cases, including attorneys Chris Fabricant, Dana Delger and Vanessa Potkin, were all featured in “The Innocence Files.”  I encourage you to read Radley Balko and Tucker Carrington’s book, “The Cadaver King and the Country Doctor,” which tells the story of widespread forensics error in Mississippi, including in Brewer and Brooks’ cases.  You can read the testimony from Brewer‘s case on my data website.

I describe in “Convicting the Innocent” how: “in 1992, Kennedy Brewer’s girlfriend’s three-year-old daughter was abducted from their Macon, Mississippi, home, and was raped and murdered. Police immediately suspected Brewer and arrested him even before the victim’s body was found. He had been home babysitting that evening, and there was no evidence of a forced entry, although the window where the victim had been sleeping was open. In 1995 Brewer was convicted of murder and sexual battery and sentenced to death. DNA testing was not used at the time of trial, because the semen sample from the victim’s body was deemed insufficient for testing. The chief evidence of Brewer’s guilt came from marks on the victim’s body. The medical examiner concluded that those marks were human bite marks. Forensic dentist Michael West concluded that nineteen bite marks on the victim’s body came from Brew- er’s teeth. West said he was certain, and before the jury he added his calling card flourish, “indeed and without a doubt.” At the time, West had already been removed or had resigned pending expulsion from two associations of forensic dentists due to his unreliable methods and conclusions.

Years later, analysts examined the evidence in Brewer’s case and de- termined that the marks were not human bites at all. They were bites from insects. This was logical. The victim’s body had been in a creek for two days, in hot May weather in Mississippi.”

The final episode of the series focuses on the case of  Kenneth Wyniemko, who was sentenced to 40-60 years in prison in Michigan.  Wyniemko was identified by an eyewitness, the victim of a sexual assault, who initially was only “60%” sure.  Indeed, the eyewitness told police that since the attacker had blindfolded her, she could not get a good look at his face.  Nevertheless, the police worked with her to create a composite image, which lead to an anonymous tip, and the police placing Wyniemko in a photo lineup that the victim examine.  Wyniemko did not match the body type or general description  the victim gave of the assailant, either. The testimony is summarized here, in a spreadsheet also quoting and describing eyewitness misidentifications in the first 250 DNA  exoneration cases. My “Convicting the Innocent” book describes what causes such eyewitness misidentifications and details the first 250 DNA  exonerations.  I note that “in Kenneth Wyniemko’s case the attacker had worn a stocking mask, and forensic evidence excluded him.”

Thomas Haynesworth was identified by a series of eyewitness, who all misidentified him in similarly biased and problematic lineups. More information is here. He was  exonerated after 27 years in prison. An audit ordered by then-governor Mark Warner, resulted in DNA testing in a series of Virginia cases, including his – and the DNA results cleared him and matched a serial rapist.

Although Kenneth Wyniemko was identified at trial by an eyewitness, that witness had not initially identified him at all at the original police lineup – but this initial non- identification was not disclosed at trial. Such police and prosecutorial misconduct is unfortunately all too common in exoneration cases. In Kenneth Wyniemko’s case, an informant further buttressed the prosecution case, as I describe in “Convicting the Innocent.” The informant explained that he had admitted that he “got rid of everything” and had worn latex gloves, which was used to explain how the forensic evidence had excluded Wyniemko.  Other factors contributed to the wrongful conviction like in so many other cases; for example, Kenneth Wyniemko’s lawyer was appointed so late that he had only a weekend to prepare before the five-day trial. After two decades in prison, he was exonerated by the WMU-Cooley Innocence Project at the Thomas M. Cooley Law School and pro bono counsel Gail Pamukov. Today, Wyniemko received compensation from the state and created a foundation to fight wrongful convictions.