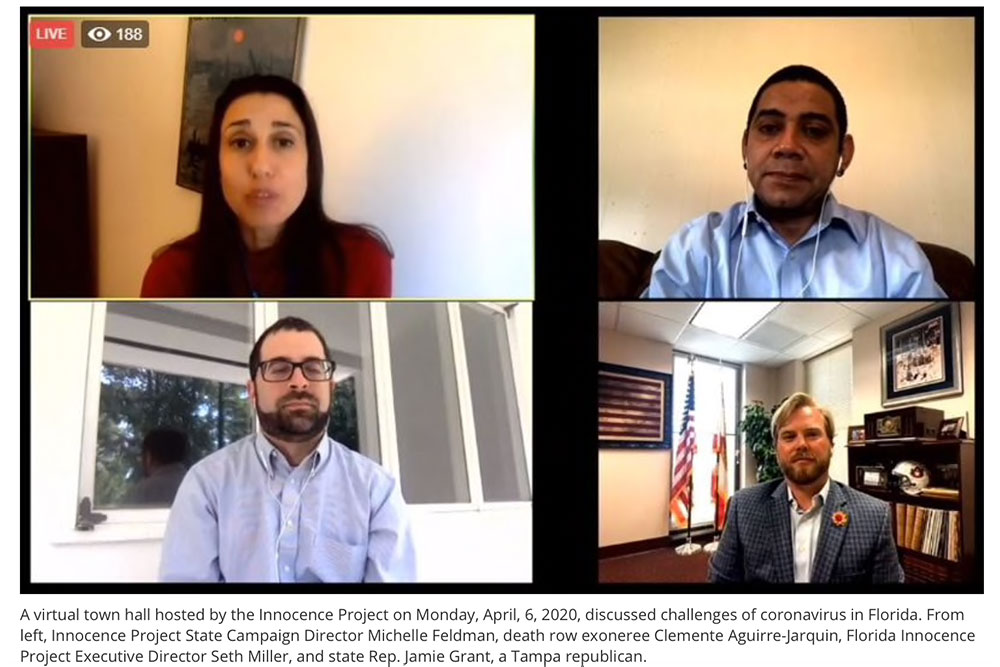 Innocence Claims Remain on Hold During the Pandemic

In many jurisdictions across the country, criminal courts have been closed or running on limited calendars since March, due to the coronavirus pandemic. While a useful measure for slowing the spread of coronavirus, the closures have presented a novel challenge for inmates with ongoing innocence claims. Hundreds of innocence claims that were making their way through the courts are now on hold, and the inmates making them left to wait, fearful for their lives, as coronavirus spreads at alarming rates in prison.

On April 6, the Florida Innocence Project, a nonprofit that aims to exonerate wrongly convicted people, hosted a virtual town hall discussing the challenges of coronavirus in Florida. Seth Miller, executive director of the Florida Innocence Project, said that their clients are “both concerned about resolving their cases and getting out, but also concerned that in the time that they remain in, awaiting this pandemic to abate, they are going to get sick and not have an opportunity to vindicate themselves in this life.”

One of the clients of the Duke Law Wrongful Convictions clinic, who has claimed innocence, has tested positive for COVID, along with large numbers of people at the Neuse Correctional Institution in Goldsboro, NC (all inmates there have since been transferred to another prison).

Two days later, on April 8, Pennsylvania reported the first COVID-19-related death in one of its prisons. The victim, Rudolph Sutton, was 67 years old and had been fighting for his innocence for the past 30 years. According to the legal director of the Pennsylvania Innocence Project, he “should have never been incarcerated in the first place.” The executive director called Sutton’s death “a tragic failing heightened by the possibility that swift action could have prevented it from happening.” Sutton started having chest pains in early March, was taken to a hospital, but returned to prison after only 10 days. His condition worsened, but he was not taken back to the hospital. His son told the Philadelphia Inquirer that Sutton would say to him, “I’m trapped in here waiting to die.” Officials failed to deploy “swift action” in Sutton’s case not only medically but also legally. Sutton’s son received news of his dad’s death the same day he heard about a “breakthrough” in his case: the prosecutors had agreed to review his father’s innocence claim after The Innocence Project had reached, following a five-year investigation, the conclusion that Sutton and his co-defendants were likely innocent. “We waited 30 years for this,” Sutton’s son said of the update on his dad’s case. “I was concerned he wasn’t going to make it out in time. That’s exactly what happened.” The Innocence Project Legal Director called on “the governor, the Department of Corrections, the legislature, and the courts to act quickly so that another factually innocent person does not risk death in prison due to COVID-19.”

Many more fear that the same fate as Sutton’s awaits their loved ones, as the pandemic has effectively “upended the process for defense attorneys to try to exonerate their clients facing capital punishment,” according to the Marshall Project.

Walter Ogrod, 55, is another PA state inmate fighting for his innocence. On February 28 of this year, after 23 years on death row for a murder charge, Ogrod was set to be freed after the Philadelphia District Attorney’s office filed a brief arguing that Ogrod was “likely innocent” and asked for his release from prison.  However, when courts closed due to coronavirus, Ogrod’s next court date got postponed until June at the earliest. On March 11, while his exoneration remained on hold, Ogrod began showing symptoms of COVID-19. A judge ordered his transfer to a hospital, but state prison officials denied the request. Ogrod has luckily recovered since, and his lawyer has asked the judge to expedite a ruling finding him innocent.

Like Ogrod, “hundreds more wrongly convicted people have cases lingering in various stages of litigation,” the Atlantic reports. These cases will “go to the back of the line, behind new criminal cases, once courts reopen.” Among the people who will have to wait to have their cases heard are Donald Lucas (60), who was recently granted a new trial after two decades in prison; Jimmy Ates (72), whose murder conviction was overturned twice and who is waiting to be tried by Florida prosecutors a third time; Rosa Jimenez (37), who four different judges have concluded “did not receive a fair trial and is probably innocent;” and Cristopher Smith, who “should have been released from prison, or granted a new trial, months ago” but whose exoneration decision has been waiting on a judge’s desk to be signed instead. The Atlantic points out that “justice delayed could be a death sentence” for these people, as each of them has a pre-existing health condition. In prison, where people “appear to be about 10 years older than their chronological health” on average, the delays caused by the pandemic are especially deadly.

Court closures are not the only challenge to pursuing innocence claims during a pandemic. As the Chicago Tribune reports, innocence claims require “interviews and other kinds of shoe-leather work that is now nearly impossible” due to social distancing. In Chicago, prosecutors are still reviewing dozens of cases of potentially innocent people related to former detective Renaldo Guevara and criminally convicted former sergeant Ronald Watts, but the process is severely disrupted. And some inmates in the city, like Wayne Antusas and Nicholas Morfin, whose innocence claims were approaching a turning point, will have to wait indefinitely for their new hearing dates to argue their innocence before judges. Last year, Illinois had 30 exonerations, the highest in the country, and the state has cleared over 300 convicts in the past 30 years. This year, the numbers are likely to be much lower.

Even for people whose charges have successfully been overturned, the pandemic has become an impediment. A judge overturned Darrill Henry’s double-murder charge in March. By late April, Henry was still behind bars. Louisiana prosecutors kept him in quarantine, claiming that he may have been exposed to the coronavirus in Angola prison, which has been struggling with an outbreak. Vanessa Potkin, director of post-conviction litigation for the Innocence Project and attorney for Darrill Henry, called the state’s refusal to release Henry “unconscionable” and said, “Mr. Henry lives in a dorm with close to 100 other men. It would be beyond devastating for him to become sick and die with new DNA evidence proving he is a wrongfully convicted, innocent man.” Other attorneys around the country are filing emergency motions to get dozens of people with overturned charges out of prison.

Some states have released inmates early (albeit very slowly and in small numbers) to help prevent the spread of the virus. For many people mentioned in this article, however, those policies will likely not offer a way out of prison. Early release has typically been reserved for people who were not convicted of violent crimes and who are within six to twelve months of their release date. The policies thus do not apply to those who are claiming innocence for violent crimes or who have not approached their release date.

Even for the lucky group who have managed to have their names cleared, the challenges do not stop after exoneration. Among the speakers in the April 6 Florida town hall was Clemente Aguirre-Jarquin, who was exonerated in 2018 after spending 14 years in prison on a murder charge. Aguirre-Jarquin spoke of the unique challenges facing exonorees during the pandemic. In addition to the emotional toll of social isolation, which “brings you back to the place you were, back then, when you were locked up for real,” exonorees face added financial burdens. Many exonorees, like Aguirre-Jarquin himself, never receive compensation for the years they wrongfully spent in prison. In Florida, where Aguirre-Jarquin was incarcerated, only four of 30 exonorees have received compensation through the Victims of Wrongful Incarceration Compensation Act since it passed in 2008, due to deadlines that make it almost impossible for many to apply in time and deny people with previous charges any compensation. Aguirre-Jarquin was held in jail for so long after his case was overturned that he missed the deadline to receive compensation. Recently, he has been talking to Florida senators about reforming the state’s compensation laws. He hopes to bring attention to the plight of the wrongfully convicted, whether they remain behind bars or have re-entered the community.

Many thousands of people who should not be behind bars in the first place are now at risk of falling ill and even dying there – include people who may be able to show their actual innocence. The pandemic has put in stark contrast the speed at which a deadly virus can spread within the small, cramped spaces of overpopulated US prisons, and the slow pace at which innocence claims have always proceeded.  There were already “so many and varied ways to slow down the release of an inmate believed to be wrongly convicted” within the bounds of law. The coronavirus pandemic is the latest item on that list.