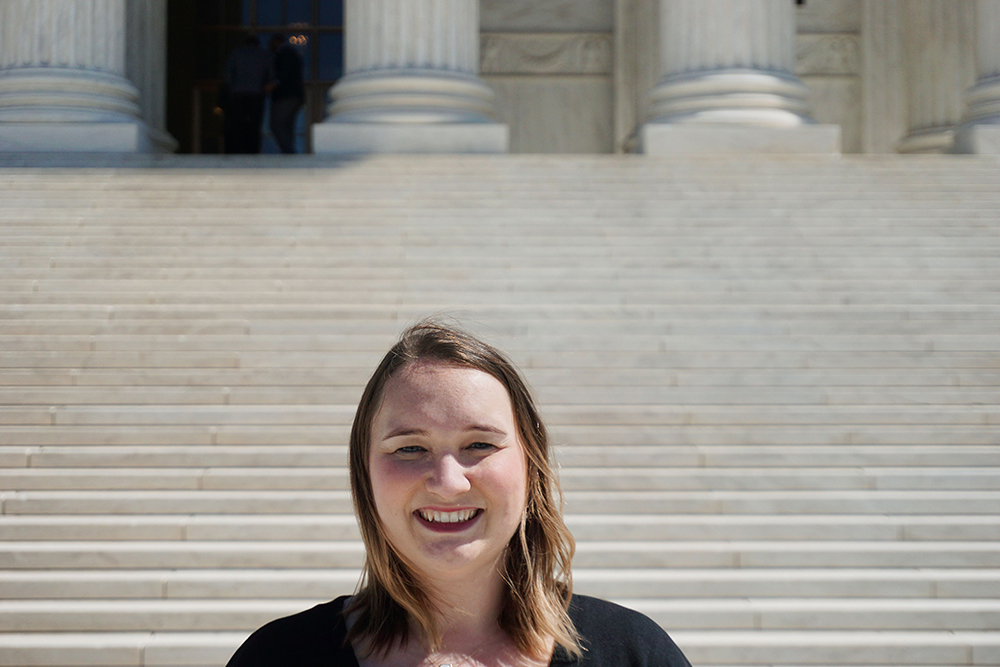 Melissa Boughton, who has been an award-winning journalist for nearly a decade, joined the Duke Center for Science and Justice this week as the Senior Communications Specialist.

Boughton most recently worked as the Courts, Law, Democracy and Immigration reporter at NC Policy Watch, where she covered local, state and federal courts and wrote about key decisions that impacted the lives of North Carolinians.

During her tenure as a hard-hitting reporter in North Carolina, Boughton wrote about redistricting and gerrymandering, the Trump Administration, state and federal judicial issues, civil and voting rights and extreme partisan gridlock, as well as many of the important criminal justice matters the Center for Science and Justice examines. She was twice credentialed to cover cases at the U.S. Supreme Court.

Boughton said she is excited to transition her broad storytelling skills as a journalist to a more focused narrative about criminal justice reform.

“Writing about criminal justice has been at the heart of my entire journalism career – it’s only fitting my journey would lead me to the work of this Center,” she said. “As I once felt the call to journalism, I feel the call now just as strongly to do everything I can to improve the criminal justice system in this country. Communications is one of the most powerful tools out there to advance change.”

Boughton started her journalism career as a police reporter in Kerrville, Texas, where she frequently embedded with local law enforcement to get behind-the-scenes stories about small-town community policing. She wrote about crimes big and small and followed their evolution through the court system. She went on to work the crime and courts beats at The Winchester Star in Winchester, Virginia, and The Post and Courier in Charleston, South Carolina.

Boughton has covered national stories, including the police shooting of Walter Scott and the racially-motivated shooting at Emanuel AME Church in Charleston that left nine dead, and she was a part of the Post and Courier team named a finalist for the 2016 Pulitzer Prize in breaking news reporting for coverage of Scott’s death. She’s covered a co-worker’s still unsolved murder – fighting for information every step of the way and leading a winning court battle for search warrant documents. She has also written extensively about the justice system and intersecting issues like criminalizing poverty through court fines and fees, mass incarceration, addiction, race and equity issues, human trafficking and the juvenile justice system.

Most recently, Boughton received the Media & the Law Award from the North Carolina Bar Association and the N.C. Press Association. She was also recognized in 2018 by the National Juvenile Justice Network with The Story of Justice Media Award for her outstanding coverage of youth justice reforms in North Carolina.

Boughton will manage internal and external communications at the Center for Science and Justice, as well as its social media presence. She is eager to promote the Center’s impactful research to help improve criminal justice outcomes.

“We are excited to have Melissa bring her experience, passion and talent to the Center to help us communicate about our work, and the importance of criminal justice reform,” said Executive Director Thomas Maher.