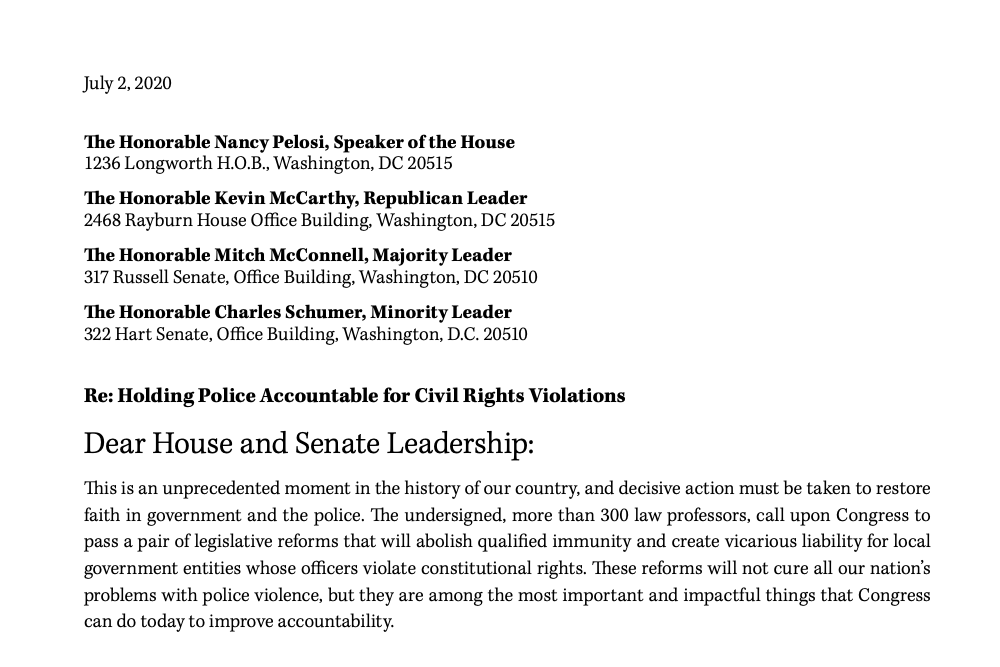 More than 300 law professors from across the country signed a letter last week calling on Congress to end qualified immunity and create vicarious liability for local government units when their officers violate people’s constitutional rights.

As stated in the letter, a “qualified immunity” defense makes recovery against a police oﬃcer very diﬃcult, even when the oﬃcer has violated a person’s constitutional rights. Similarly, the U.S. Supreme Court has established insurmountable limits for a plaintiﬀ who wants to sue the local government employer for an oﬃcer’s unconstitutional conduct.

In the wake of a rash of police killings and the brutal use of force in Black and Brown communities across the nation, law professors who signed on to the letter asked Congressional members to pass a pair of legislative reforms to improve police accountability.

Duke Law Professor Brandon Garrett, who is also the Director of the Duke Center for Science and Justice, signed on to the letter. He is a leading scholar of criminal justice outcomes, evidence, and constitutional rights, and is involved with a number of law reform initiatives.

Garrett recently spoke to the media about a variety of policy and reform issues with a focus on police accountability. He also highlighted the Center for Science and Justice’s work on police use of force policies.

“Police in America have incredibly broad discretion to use deadly force,” he said in late June. “About 1,000 people are killed each year by police, making police violence a leading cause of death for black men in particular. This is a public health and civil rights crisis. It’s also a legal and cultural crisis.”

The current proposed reforms at Congress are not a panacea, but rather a start, according to the letter Garrett signed.

“These reforms will not cure all our nation’s problems with police violence, but they are among the most important and impactful things that Congress can do today to improve accountability,” it states.

Read the full letter below.