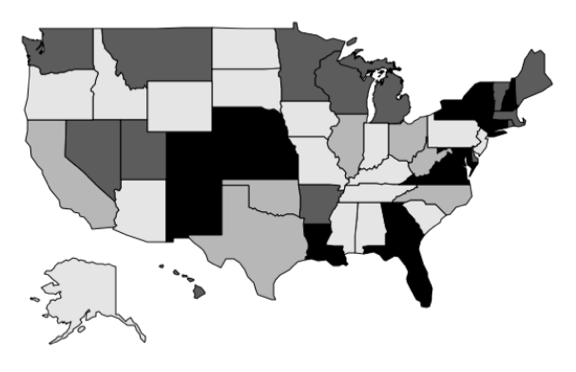 Eyewitness evidence, used in tens of thousands of criminal cases each year, crucially depends on eyewitness memory, which is quite fallible. The potential inaccuracy of eyewitness memory has been long demonstrated by examples of misidentifications, including in cases of wrongful conviction. Eyewitness identification procedures, which are themselves experiments, lend themselves to scientific research as do few others in law. Today, decades of scientific research on visual perception and memory have identified key causes of error and methods for improving eyewitness performance. As a result, eyewitness evidence has become a testing ground for the use of science to inform the law. This Article examines how legal actors — state and federal courts, state lawmakers, and police agencies — have responded to this body of research. While U.S. Supreme Court rulings set a constitutional floor, we find that it largely does not inform eyewitness evidence law. State courts have increasingly incorporated eyewitness memory science, as we describe in a detailed fifty-state survey of rulings. Second, we explore how state lawmakers have done still more, in an analysis of twenty-four state statutes that regulate eyewitness identification procedure. Third, policing agencies have most eagerly embraced revised identification practices to take account of scientific research. We describe a sea change in police practice, including through model policy adopted in twenty-nine states. Based on these findings, we call into question top-down, stare-decisis-bound, and federal court-centric accounts that dominate constitutional criminal procedure. Further, we describe how research continues to progress; a new generation of research promises to further improve accuracy of eyewitness procedures. While constitutional criminal procedure is unlikely to change in the near future, we expect that local actors will harness research developments. We conclude by asking why, in the eyewitness area, criminal investigation and procedure have been so receptive to research. We suggest that rather than adopting a legal precedent-based system, police practices and statutes employ a scientific framework that can incorporate new discoveries. This account of dissemination and adoption of research points towards a dynamic framework for the use of science in the legal system.

That’s the abstract from a new article written by Duke Center for Science and Justice Director Brandon Garrett and Salk Institute Professor and Director of the Vision Center Laboratory Dr. Thomas Albright.

“Our account calls into question a top-down, stare-decisis-bound, and court-centric accounts that dominate constitutional criminal procedure,” Garrett said. “More broadly, this dynamic account of bottom-up dissemination of scientific research has implications for how we conceive the role of science in the legal system.”

“The Law and Science of Eyewitness Evidence” describes not only developments in science that have occurred since the National Academy of Sciences Committee report, but widespread legal change, together with concrete ways that the fundamental concept of a lineup identification can be reconceived.