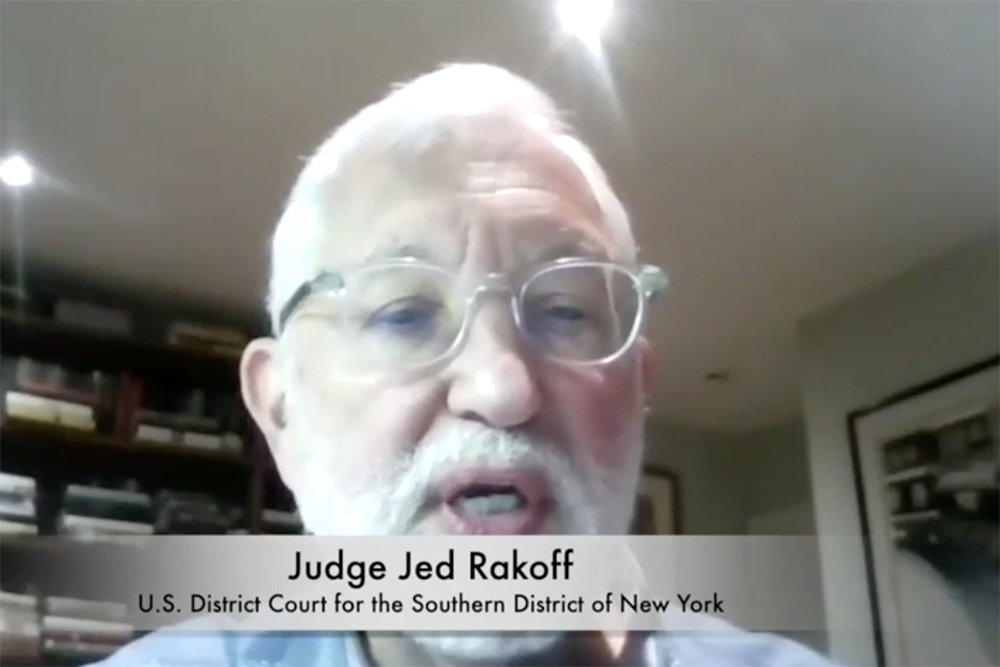 Eyewitness testimony is one of the oldest and most basic forms of trial evidence. If a witness sees a person commit a crime, reports to the police, and is able to identify the culprit in a lineup procedure, the system must have worked. Unfortunately, research tells us that eyewitnesses can and do make mistakes, even after police test their memory using a lineup.

In a conference hosted by the Wilson Center for Science and Justice last week, keynote speakers Judge Jed Rakoff and Dr. Thomas Albright both discussed the importance and the pitfalls of eyewitness evidence. Judges Rakoff and Dr. Albright co-chaired the influential National Academy of Sciences Report, titled “Identifying the Culprit: Assessing Eyewitness Identification,” published in 2014. The Wilson Center conference, supported by a grant from Arnold Ventures, convened top researchers, as well as defense lawyers, prosecutors, police chiefs, and judges. The attendees looked back at what has changed since that 2014 report and they looked forward to describe promising future directions for research and practice.

The conference was titled, “New Directions in Eyewitness Evidence Research and Practice: Six Years After the National Academy of Sciences Report.” In Spring, 2021, the Wilson Center, together with collaborators, will release a report summarizing these developments.

In his opening address, Judge Rakoff looked at the problem from a legal and procedural approach, while Dr. Albright, who concluded the conference with his remarks, provided a scientific perspective. The keynote addresses of both speakers point to the problems with eyewitness testimony, the importance of eyewitness testimony in creating a fair judicial system, and what steps can be taken in the future.

Dr. Albright began with a similar starting place, by explaining that an eyewitness can be viewed as like a machine, that takes inputs (a view of a culprit’s face) to produce an output (storing and then recalling a visual memory). Dr. Albright suggests, much like Judge Rakoff, that we cannot eliminate the uncertainty associated with eyewitness evidence because we are asking humans to do something that they can inherently fail at. As Dr. Albright puts it, “the machine [human testimony] is broken” because we are asking humans something that they are not supposed to do.

Judge Rakoff acknowledges there have been reforms related to better ensuring the accuracy of eyewitness testimonies. However, many of these reforms have been adopted piecemeal, in limited form, and they vary state by state. Some states still do not require that the person administering the lineup or photo array has to be someone other than a police officer who knows which person is the suspect. In some states, the initial level of confidence in the identification does not need to be recorded.

Judge Rakoff acknowledges that some of the fallibility of an eyewitness can be quite obvious, like obstructions or poor eyesight. Yet, there are more subtle problems with eyewitness testimony. Many witnesses will mix-up memories from the actual crime with following photo arrays or lineups, eventually falling victim to a merger effect, wherein witnesses will be overly confident in a specific feature of a supposed criminal because they have conflated evidence and original testimonies. Furthermore, as time goes on, there may be increased confidence in the identification. A crime may be committed long before the witness has the opportunity to testify at a trial.

Dr. Albright further echoed Judge Rakoff’s concerns, noting that people are generally better at making comparative rather than absolute judgments. It is very hard for the human brain to say, with 100% accuracy, “that’s the person who did it.” Eyewitness identification procedures demand an absolute judgment, which the human brain is not suited to do.

Further, Judge Rakoff described how due to a cross-race effect, humans are far worse at remembering faces of persons of a different race, and features that do not match their own.

So, what can we do? Judge Rakoff advocated improved process and education for juries, as well as prosecutors, and police officers, as so many of these cases are settled out of court. Dr. Albright calls for better research and statistical analysis. Dr. Albright suggests taking the guessing game out of the process, to ask eyewitnesses to make relative judgments and not absolute judgments. Dr. Albright’s proposal would alter how lineups are administered, and reconstruct the data into a comparative judgment express statistically. This way, the variables and decision criteria can be accessed outside of the eyewitness’s brain.

Dr. Albright concluded by reminding us that we all experience the challenge that an eyewitness faces in every day, ubiquitous problems, just with lower stakes. How many times have you forgotten what a new friend’s house looks like on a street with similar-looking houses? You pull up to the wrong house and knock on the wrong door. In a criminal case, however, suddenly, the stakes are not so small.

Sydney Gaviser is an undergraduate student at Duke University working this semester with the Wilson Center for Science and Justice.