Forward Justice’s Atkinson Estimates 5,000 Could Vote This Election Thanks to Lawsuit over Felony Disenfranchisement 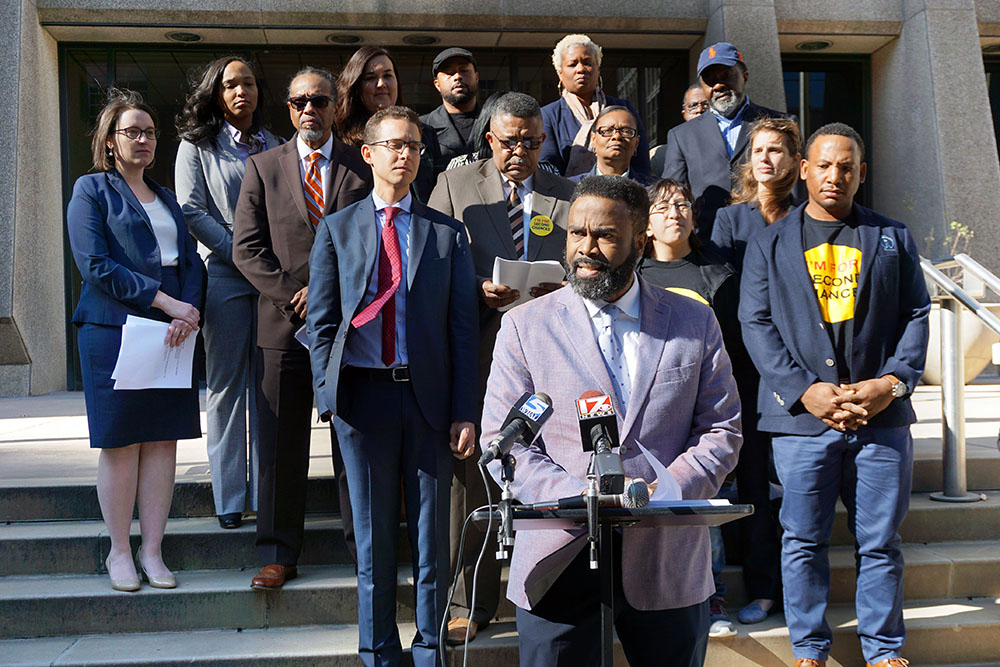 Felony disenfranchisement rates are highest in Southern states, including in North Carolina, where voting restrictions passed during the Jim Crow era aimed to limit the political power of Black men.

The Sentencing Project estimates that more than 5 million people across the nation will not be able to vote in the upcoming election because of a felony conviction. About 1 in 16 Black adults are disenfranchised, according to the same data, which is about 3.7 times the rate of the non-Black voting age population.

A recent case in North Carolina is trying making strides to reduce disenfranchisement in the state.

Dunlow dissented, while Bell and Gregory wrote: “our Constitution is clear: no property qualification shall affect the right to vote.”

With this statute in mind, inhibiting people’s right to vote solely due to their lack of access to wealth is a violation of the constitution, according to the ruling.

The case was brought forth after Forward Justice filed a lawsuit on behalf of four individual North Carolinians and several community organizations concerned with voter registration and education.

Forward Justice is “a nonpartisan law, policy, and strategy center dedicated to advancing racial, social, and economic justice in the U.S. South.” The lawsuit fell under its “Unlock Our Vote” campaign – the organization’s ongoing fight to restore voting rights for all people in North Carolina with felony convictions who have completed their prison sentences, excluding probation or parole.

Daryl Atkinson, Counsel and Co-Director of Forward Justice, estimated that with the decision, 5,000 more people who would not have been able to vote previously will be able to vote in this election.

The first North Carolina Constitution was created in 1776 after the American Declaration of Independence; however, the Constitution underwent major revisions in 1868 as a condition for the state to be readmitted to the Union after the Civil War. Under Article VI of this revised constitution guaranteed universal manhood suffrage, which agitated Democrats at the time. In response, North Carolina adopted its first felon disenfranchisement clause into the North Carolina Constitution in 1867 with the intent of limiting Black men’s right to vote who were over-criminalized and disproportionately charged with felonies.

Felony disenfranchisement laws persist in North Carolina. Here, people with felony convictions cannot vote until they have finished their entire sentence, including probation or parole. Until this Superior Court decision, completion of those sentences included paying all court costs and fees associated with a defendants’ case.

The Wake County Superior Court’s decision is critical to the nation’s promise of democracy. In this case, Dr. Frank Baumgartner, expert eyewitness, and Richard J. Richardson, Distinguished Professor at the University of North Carolina at Chapel Hill, stated that Black people represent 21% of the voting age population but 42% of those disenfranchised due to post-felony convictions in North Carolina. This denies Black communities “substantial equal voting power.”

Forward Justice’s work is ongoing as the organization plans to go to trial in February 2021, with the hopes of restoring the rights of potentially over 50,000 more voters.

“In general, we seek to make public and transparent important problems in our criminal system,” said Brandon Garrett, Wilson Center Director and Duke Law professor, when asked about the Center’s efforts in the case.  “Making data available on an open website, in an interactive and useful fashion, is exactly what we do here at the Wilson Center.”

Not only is the Center fulfilling its central mission, it’s helping to bring awareness to a systemic and longstanding problem within Durham and the broader North Carolina community.

Garrett also explained that this case is only the first step of a long journey toward voter justice. He said that while other lawsuits are being brought to court around the country, this case may serve as a good blueprint for future cases. However, there is still so much to be done to address the lack of voter rights for people with felonies.

“The loss of voting rights is only one way that convictions impact people for years after the reentry,” he said. “There is so much work to do to promote restoration of rights and reentry in North Carolina and nationally.”

The Forward Justice ruling does bode for a more hopeful future. Furthermore, with a landmark election coming up, it’s more and more meaningful for disenfranchised people to get a chance to cast their ballot.

For Atkinson too, who brought the monumental arguments to court, there is something especially meaningful about the case. He remains disenfranchised in Alabama from a $32,000 fine as a result of a 1996 conviction. He’s been paying that fine for 192 months since 2004. Atkinson fought passionately for a cause that was not only meaningful to him, but directly impacted him. With inspired leaders from Forward Justice and irrefutable data from the Wilson Center, future election days are looking brighter and brighter.

Wood and Gaviser are undergraduate students at Duke University working this semester with the Wilson Center for Science and Justice.