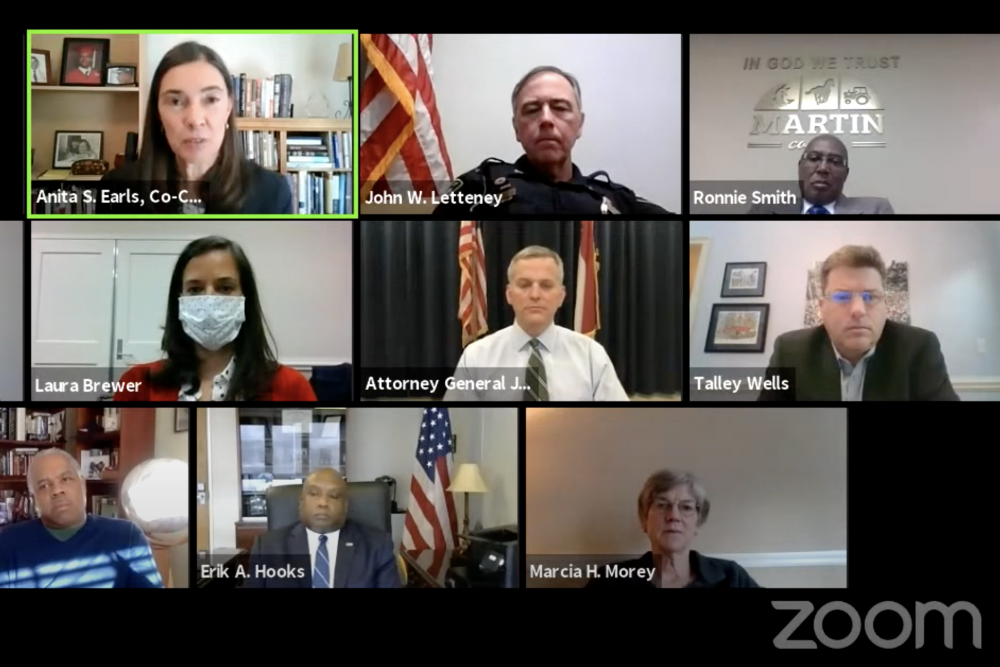 In December, North Carolina’s Task Force for Racial Equity in Criminal Justice (TREC) released 125 recommendations that encompass all aspects of the criminal justice system, starting with police contact, then the courts, and sentencing.

“North Carolina can reimagine public safety to provide accountability for victims and safety for communities without the grotesque racial disparities that manifest in so many ways in our criminal justice system,” said co-chairs NC Supreme Court Justice Anita Earls and Attorney General Josh Stein.

Gov. Roy Cooper formed the task force in June of last year following the police brutality protests over the deaths of George Floyd and Breonna Taylor. The 24 members are comprised of elected officials, attorneys, law enforcement, and civil rights advocates.

The full report begins with a brief history of the racial disparities in the criminal justice system after the abolition of slavery. It goes on to acknowledge the long-term effects of this behavior, racial trauma, and adverse childhood experiences that result from it. These events, including parental incarceration, manifest into mental illness and stress disorders that further contribute to a cycle of systemic racism.

The task force tackled an extensive range of areas: educating the community, alternatives to arrest, law enforcement training and recruitment, court practices, sentencing, and incarceration facilities. Each recommendation is accompanied by a necessary action that cites the rulemaking authority and suggests revisions to specific legislation when applicable.

For law enforcement, the report calls for greater transparency and accountability to rebuild relationships with communities, required racial equity training, and stronger standards for de-escalation practices, including a prohibition on chokeholds.

When evaluating the court systems, TREC simultaneously targets policies that are based in poverty. Most misdemeanors classified as nonviolent offenses are linked closely with the criminalization of homelessness and addiction, such as asking for money or public urination. They generally ask the legislature to review these low-level misdemeanors and suggest that some of these be classified as infractions. Bails and fines also disproportionately affect Black defendants, and they recommend the elimination of cash bail for Class I, II, and III misdemeanors and the limitation of other financial costs for defendants.

Other notable issues the task force examines are addressing needs of victims, improved access to rehabilitation and mental health facilities, and the re-evaluation of the juvenile justice system.

“North Carolina has the youngest age by statute where children can be put in the juvenile system, and that’s age 6,” said Rep. Marcia Morey (D-Durham), a task-force member and a former Chief District Court Judge. “No other state in the country has that young of an age. I remember, as a judge, sometimes we would have 6- or 7-year-olds in court for a behavioral issue that happened at school or a developmental issue. These young kids have no idea what is happening in a court. They are sitting there. Their feet can’t even touch the floor.”

Throughout the development of the report, the panel relied heavily on public input and data to identify problematic areas in the system. When conducting their research, the Wilson Center provided them with recent reports and gave presentations on research regarding sentencing and fines and fees. The Center’s Research Director Will Crozier is a member of the panel’s Data Consultation Team and gave input in weekly meetings in developing requirements for data production and reporting.

“The data team, appropriately, took a pretty data-driven approach to answering the questions posed to us,” said Crozier. “We’d look to see what data and scholarship exists, and if we can use that to answer the questions posed to us by the working groups. If not, we would consider what we do know, what data could answer their questions, and the feasibility of getting such data. Sometimes it was as simple as ‘The Administrative Office of the Courts has that and could tell us;’ others it was, ‘that would take a lot of data matching across various data sources.’”

Police, courts, and jails all lack systems for reporting and oftentimes have inconsistent or missing data, making it difficult to identify all of the issues present. Several recommendations were made to improve data collection to better ensure accountability and racial equity.

The Task Force’s recommendations are extensive in the ground that they cover, and in order to achieve racial equity in North Carolina’s criminal justice system, it is imperative that these recommendations are viewed comprehensively, not individually. While most of these suggestions are at the administrative level, many still require legislative changes.

Last week, the North Carolina General Assembly reconvened to Republican majorities in both the House and Senate. The bills the TREC proposes will require Republican sponsorship to pass. Morey is hopeful for both parties to come together and “close this divide. Look at it through not a political lens but an equity lens.” For instance, more conservative-leaning organizations have voiced their support for more criminal justice reform. The John Locke Foundation, a think tank in North Carolina, recommends the review of low-level misdemeanors due to over-criminalization in the state.

Looking forward, the Task Force will meet quarterly until December 2022 with committees meeting monthly. Meetings are public and may be accessed through Attorney General Josh Stein’s Youtube page.