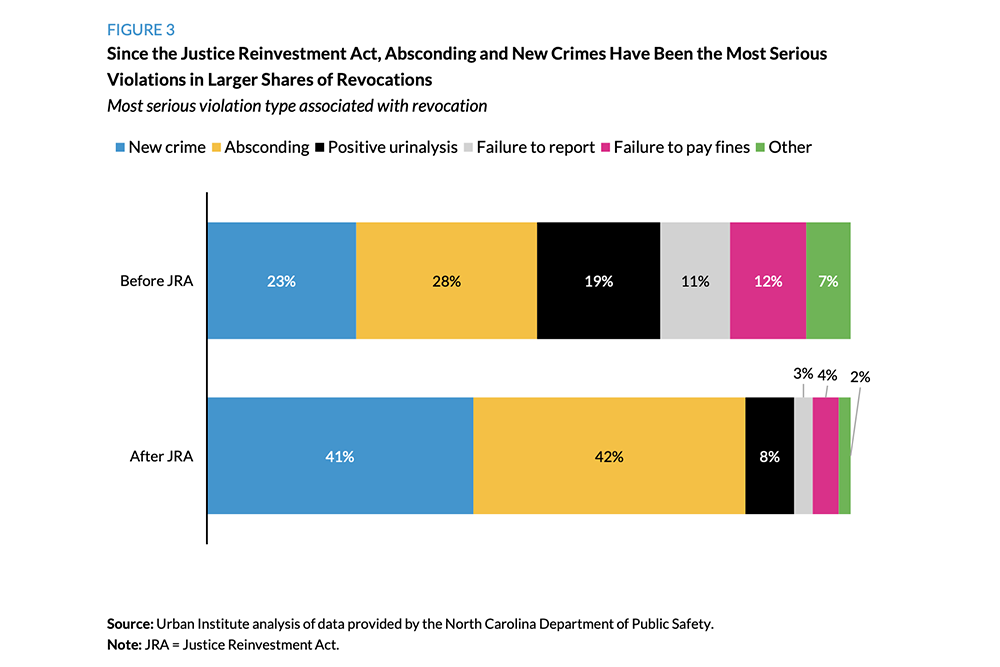 The Urban Institute recently released an assessment of the outcomes from changes made to the Supervision Revocation Policy in 2011. The report examines outcomes for individuals on probation, post-release supervision, and parole supervision before and after the changes were implemented.

In 2010, North Carolina’s prison population was projected to increase 10 percent by 2020 after increasing by 30 percent the decade before. Revocations, or the retraction of parole or post-release violations, were a major contributor to this growth. In response, a bipartisan group of state leaders studied the correctional system in order to recommend ways to reduce prison populations. Then-governor Bev Perdue signed the Justice Reinvestment Act (JRA) in June 2011, adding options for supervision violations and reducing revocations to prisons.

“The state created Confinement in Response to Violation (CRV) centers to detain people subject to the 90-day cap on revocation time and to provide structured cognitive behavioral and substance use interventions,” said Ashlin Oglesby-Neal, Robin Olsen, Megan Russo, and Brian Elderbroom, associates at the Urban Institute and authors of the assessment. “The law prioritized substance use treatment for people with the greatest need, ensured supervision for those exiting prison, and made several improvements to the probation system.”

The new report evaluates the impact CRV terms have had on supervision terms, including responses to violations, the types of violations, and different treatment between those on probation and on post-release supervision, from 2010 to 2017.

The key findings from the assessment:

The JRA also put more investment toward training probation and parole officers, improving their responses to technical violations. The “inability to revoke” was cited as a major reason for suggesting CRV interventions instead, and while most probation officers supported this measure, those hired before JRA and those with a background in law enforcement showed weaker support.

Despite these improvements, the effects from the JRA show signs of waning. Sixteen percent of revocations still occur due to technical violations, and the increases in overall revocations in 2017 show that supervision officers may be using CRV terms less frequently or have started imposing more severe sanctions.

In order to more efficiently distribute prison resources in North Carolina, the state must build on its limit on revocation time. The criminal justice system must eliminate revocations for technical violations, as well, for conditions such as failed drugs tests and failure to pay supervision fines.

“Particularly as we see a dramatic spread of COVID-19 throughout NC prisons and jails, incarcerated individuals and the state employees that run these facilities are at increased risk when new individuals enter the prison system,” states a recent statement supporting the assessment from Conservatives for Criminal Justice Reform. “By eliminating revocations for technical violation, this risk is decreased, and the collateral consequences of incarceration are limited for individuals striving for success.”

While the JRA has helped limit revocations in the state’s criminal justice system, more must be done in order to prevent the overpopulation of the prison system, which is much more relevant with the COVID-19 pandemic. The threat of spread is much higher for incarcerated individuals, with more than 8,700 positive cases out of 35,855 prisoners in North Carolina’s system alone.