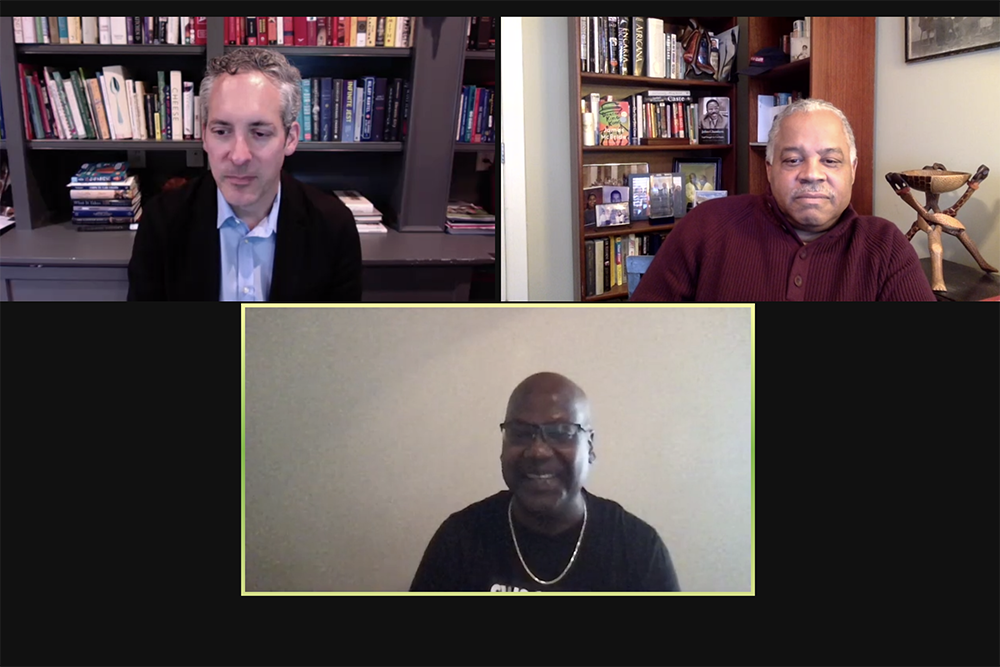 Curtis Flowers recently joined The Wilson Center to discuss his experience of being tried six times for the same four murders he didn’t commit and serving 23 years on death row. He was joined by his North Carolina attorney, Henderson Hill.

Flowers was first suspected of the fatal shooting of four people at a store in Winona, Mississippi, in July 1996. He was subsequently charged and tried six times by the state, though Flowers maintained his innocence of the murders. District Attorney Doug Evans, the prosecutor in Flowers’ case, sought the death penalty. Flowers’ first three convictions were overturned by the Mississippi Supreme Court. His fourth and fifth trials resulted in mistrials. He was convicted at a sixth trial, but it too was overturned.

His case gained more widespread attention when it was featured on Season 2 of the In the Dark podcast, hosted by Madeleine Baran, who attended the Wilson Center event. The show followed Flowers’s case and uncovered injustices throughout the police and prosecution’s conduct, casting doubt over the legitimacy of the case. With this new evidence, the U.S. Supreme Court overturned his last conviction due to racial discrimination in jury selection. Flowers was released from prison after nearly 23 years on death row after State Attorney General Lynn Fitch took over the case from Evans in September 2020 and chose not to pursue a seventh trial, dropping all charges.

When Flowers was initially brought in for questioning, he thought it was simply due to his prior employment at the store but quickly found out he was a suspect, even though there was little evidence against him, he said at the event. In court, the prosecution gathered false eyewitnesses, which were collected after offers of reward money from the police, and unreliable jailhouse informants to use against Flowers. It was later revealed that key witnesses were pressured by the prosecution, and they later recanted their stories.

Though Flowers’s legal team (including the Innocence Project, Mississippi Center for Justice, and Hogan Lovells law firm) was very talented, they faced deliberate misconduct from the District Attorney such as hiding alternative suspects and exculpatory evidence, Hill said at the event.

Flowers recounted his experience witnessing the prosecution’s heavy bias against Black jurors. Evans used 41 of 42 challenges to exclude potential black jurors across six trials, according to Hill. Though Evans’ actions were clearly discriminatory, he was never criticized for them or corrected, even by the judge.

“Doug Evans was just a racist,” Flowers said. “He just locked onto me and would not let go. I think he wanted to hold his position with the townspeople. I don’t think he wanted to look bad before them, and that was one of the reasons he stuck with what he had determined for me.”

When describing his experience on death row, Flowers said, “Parchman Prison is like the worst dream you’ve ever had, and you double that.” During his time there, Flowers was diagnosed with diabetes and had to go to the hospital multiple times due to improper medical care. Incarcerated people there were also confined to small units that create inhumane conditions, causing them to feel extreme heat and claustrophobia.

Since his release in December 2019, Flowers has not had many opportunities to travel due to the COVID-19 pandemic, but he only smiles while his brother-in-law complains. “’Welcome to the party, pal — I’ve been doing this for years, so this is nothing to me,’” said Flowers.

He also told a couple “funny” stories about adjusting to life after prison, including learning how to pump gas and being surprised by a gifted iron that had a retractable cord — he thought it just had a really small cord.

Flowers also told a story about using a restaurant urinal post prison and trying to find a handle, because that’s how you flushed two decades ago. Men in the restroom kept telling him to step away from it, and he said it would be rude to just leave it. After a few more people told him to step away again, he did and the urinal flushed automatically. When he returned to the restaurant, there was a lot of laughter.

“I think the guys went back and told their wives,” he laughed. “And one lady told me, ‘sir, it’s going to be alright; you’ve been away for a while.’ And it was a funny moment.”

When he is able to, he still meets with his father, Archie Flowers, to sing gospel music as he did when he was young. Curtis’s family was a source of motivation for him while he was behind bars, especially his mother Lola. She died in 2018, but remained optimistic about her son’s future.

“Even when I wanted to give up, she wouldn’t let that happen,” Flowers said. “It kept me strong, kept me going.”

He made sure to stay positive and faithful to his beliefs in order to prevent himself from being institutionalized and advised others in similar situations to do the same.

Because of his legal team and media exposure from In the Dark, Flowers has a generous support system that continues to help him readjust to life after prison. He is currently in the process of starting the Curtis Flowers Foundation, which he hopes will help law students enroll into schools to later help incarcerated people who experienced what he did.

Flowers’s case is evidence of systematic issues in the United States criminal legal system that have existed since its inception, causing racial disparities throughout in punishment, education, mental health, and etc. According to Hill, change also has to take place outside of the legal system, and it can be done through the public and media.

“We have now the capacity to expand our community, and it shouldn’t be that only lawyers, cops, and judges are the ones that know what goes on in a courthouse,” he said.

A full recording of the event is available to watch below.