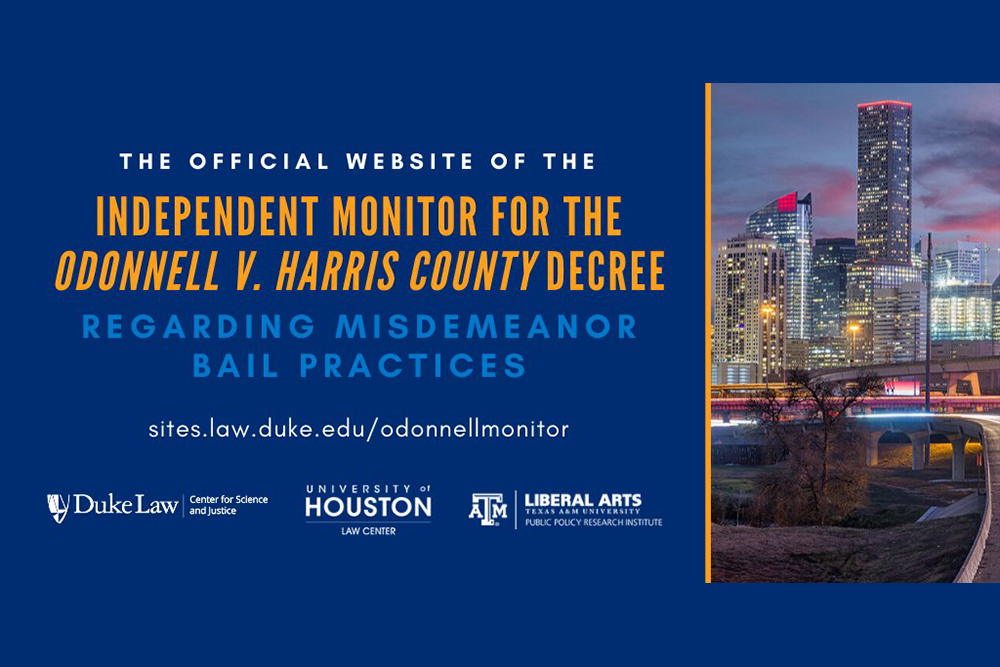 HOUSTON, T.X. – The independent monitors overseeing Harris County’s historic bail reform agreement filed their report describing their first year of work and findings with the federal court this week, noting an increase in releases, a reduced use of cash bail, no change or a decline in repeat-offending, and the implementation of a range of historic improvements to the misdemeanor system.

“After one year of our work, we are confident that the misdemeanor bail reforms in Harris County are being implemented successfully and having a positive impact on the community,” said Monitor Brandon Garrett, a Duke Law professor. “Important work has been done to improve the fairness and quality of bail hearings, to implement new rules for court appearance, and to collect robust data.”

Findings from the monitorship team, which started its work on March 3, 2020, include:

Garrett emphasized at a recent press conference that the ODonnell consent decree, which he oversees as Monitor, only applies to misdemeanor cases, not felonies.

Many charged with misdemeanors, or low-level offenses, are released on general order bonds back into the community but must appear in court when their case is heard later or face serious consequences. Individuals who are charged with misdemeanors that present public safety concerns — like domestic violence, repeat DUI offenses, or violations of probation or parole — are not automatically released and instead have bond hearings.

Garrett said those hearings are much more robust; they are longer and there is more serious consideration of the defendant’s situation in terms of their liberty and public safety. Public defenders are also present at these hearings.

“One thing that we’re really proud of these last few months is that there is now electronic discovery — the public defenders or the private lawyer, they get evidence in the case before the hearing, which doesn’t happen too many places in the country,” he added.

“The County’s training curriculum included trauma-informed lessons and diverse stories from community members as a result of our Community Working Group’s leadership,” she said. “And, the group was invaluable in advising us regarding community and media engagement as well.”

Several members of the Monitorship community working group also spoke at a recent press conference about the one-year report and their work.

Guadalupe Fernandez, Policy and Advocacy Manager at the Tahirih Justice Center in Houston, said she brings the perspective of what immigration justice is and its intersection with the criminal legal system, as well as the perspective of a survivor victim advocate.

“Often times, we see survivors themselves on both sides of that criminal legal system, be it reporting a violent crime they’ve experienced or likewise being accused of some sort of crime, in many cases non-violent and it could be due to a variety of reasons,” she said.

She added that she talked to Brandon about root causes and underlying conditions in those cases. The concern that the victim advocate community sees, though, is the criminalization of immigrants and how that plays out within practices like the issuance of misdemeanor bail, ultimately contributing to the arrest to deportation pipeline.

Terrence Koontz is also part of the working group, and said he brings lived experience to the table as a directly impacted person with a felony and misdemeanor on his record.

“I was not afforded to be let out on a personal recognizance bond,” he said of his previous interactions with the court. “So subsequently, I ended up having to spend about $10,000 in fees and costs; I spent a few nights in jail. I was able to get a first-hand experience of what the system looks like from the inside. I saw people in there calling their relatives, begging them to pawn things just to get $100 to get out.”

He said his role in the working group is to bring attention to other impacted individuals so that everyone can be more equitable and help prevent the destruction of lives.

The next Monitorship steps include assisting in further implementation of improvements to pretrial hearings to facilitate compliance with the Consent Decree; reviewing county indigent defense studies, and county completion of a training plan, and implementation of recommendations; reviewing county development of text and electronic court notification system; and conducting further analyses.

The implementation of the ODonnell Consent Decree in Harris County, Texas — which encompasses Houston and, with nearly 5 million people, is the nation’s third most populous county — governs what happens to thousands of people arrested on low-level misdemeanor offenses.

Duke Law professor Brandon Garrett was appointed independent monitor and directs the seven-year monitoring project that includes ongoing analysis of Harris County data and intensive engagement with stakeholders. He works closely with deputy monitor Sandra Guerra Thompson, professor of law and director of the Criminal Justice Institute at the University of Houston Law Center, and with Dr. Dottie Carmichael of the Public Policy Research Institute at Texas A&M University.  Dr. Songman Kang of Duke University and Hanyang University (Korea) also plays a crucial role in data analysis for the monitorship.

Read more about the new report from local Houston media:

Harris County got rid of cash bail for many people accused of minor crimes. GOP lawmakers want to walk that back. | KSAT

Harris County got rid of cash bail for many people accused of minor crimes. GOP lawmakers want to walk that back. | Texas Tribune