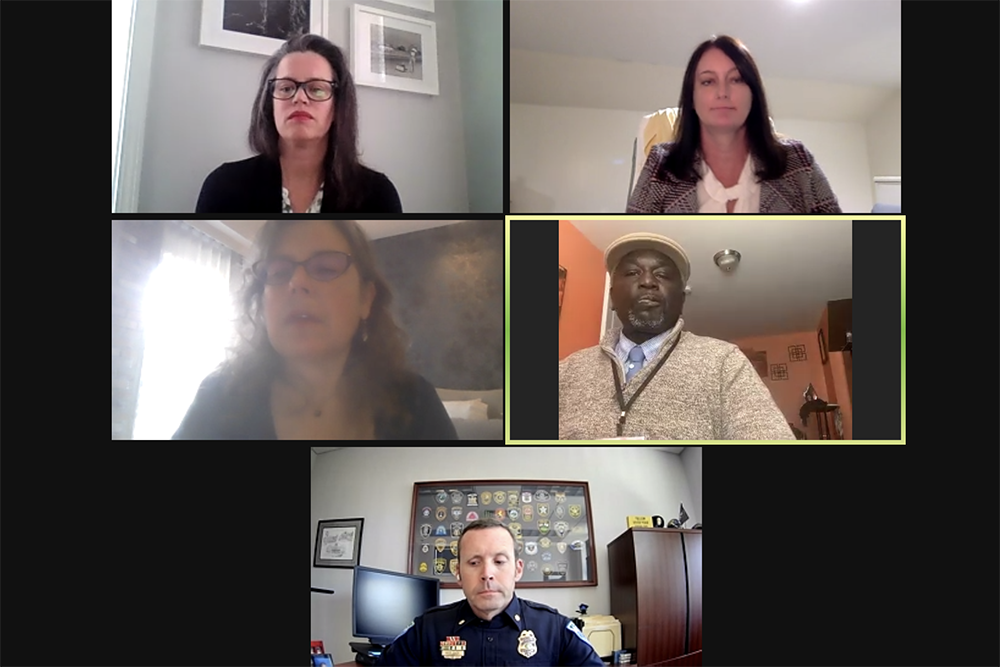 Law Enforcement Assisted Diversion (LEAD) is a community-based diversion program with the goal of reimagining public safety by decriminalizing drug abuse. Within LEAD, officers reduce unnecessary justice involvement for those struggling with substance use by connecting people who use drugs to services and treatment that prioritize their health and wellbeing.

On Thursday, April 1, the Wilson Center for Science and Justice at Duke Law hosted a roundtable event about LEAD with Lisa Daugaard, Director of the Public Defender Association; Reed Baer, Hickory, North Carolina Police Department, Deputy Chief of Police ; and Charleton Roberson, a peer support specialist from the LEAD program in Fayetteville, North Carolina. The conversation was moderated by Allison Robertson, Associate Professor in Psychiatry and Behavioral Sciences at Duke and affiliate of the Wilson Center for Science and Justice, and Melissia Larson, LEAD Coordinator at the North Carolina Harm Reduction Coalition.

Baer began the event by emphasizing the importance of programs like LEAD because he, as a law enforcement officer, understood that “you cannot arrest your way out of an addiction problem.”

He pointed out that there has been “a dramatic increase in overdoses and other things related to drug abuse and the traditional means of dealing with that — they don’t work. This is my 25th year as a police officer in the state of North Carolina,  so I’ve had my share of drug arrests… we needed to figure out a way to address the underlying issue of what was causing crime in the community, what was causing the overdoses in the community, and how do we help the community.”

LEAD provides a solution. Daugaard noted that she helped launch the flagship LEAD program in Seattle Washington after years of controversy surrounding the best approach to tackle issues involving drug use. In recent years, Dauguaard realized “that there was a growing consensus that [drug] problems were not well addressed through the traditional legal system.” Under this belief, organizers established LEAD.

Daugaard noted that LEAD operates under a harm reduction framework — a practice that focuses on working with people without judgment, coercion, or discrimination and locates resources to support them.  It seeks to empower them to make decisions that are best for their health, including stepping away from harmful drug use.

Roberson as a peer specialist has a crucial role in the harm reduction model, as he described his job as one to “solicit buy-in [from people] on the benefits of the program.” He realizes how crucial it is to “meet them where they are while also providing them with options to change if they want to” and “minimize the harm of their harmful choices.”

Daguaard stated that in her work as a public defender, she realized that “oftentimes, people are using drugs in a problematic way, not in a recreational way, but in a problematic way as a result of years of struggle and trauma that really doesn’t have to do with drugs. Drugs are coping mechanisms to survive other problems, and recognizing that stabilization and healing is going to involve tackling those other problems is often times how people gather the strength to reduce their  drug use.”

Chief Baer encouraged communities across the nation to develop similar programs, noting that if most police officers saw the “revolving door: if you arrest a person for a drug offense, they may or may not go to jail, and then, the very next day, the same officer is out with the same person having to deal with the same issue.”

She reiterated the importance of police partnerships with LEAD programs to ensure that officers do not interfere with the  program. As Daugaard pointed out, “with the support of police, we move from 80-90% of arrest referrals in the first couple of years to 92% social contact referrals over the last several years.”

The LEAD program began in Seattle thanks to the leadership of people like Daugaard and now serves a number of jurisdictions, including Santa Fe, NM, Albany, NY, Fayetteville, NC, Portland, OR, Huntington and Charleston, WV, and Baltimore, MD. Recently, California and Colorado started programs with the help of staff like Roberson and meaningful partnerships with officials like Baer.

View the full video of the LEAD event below.