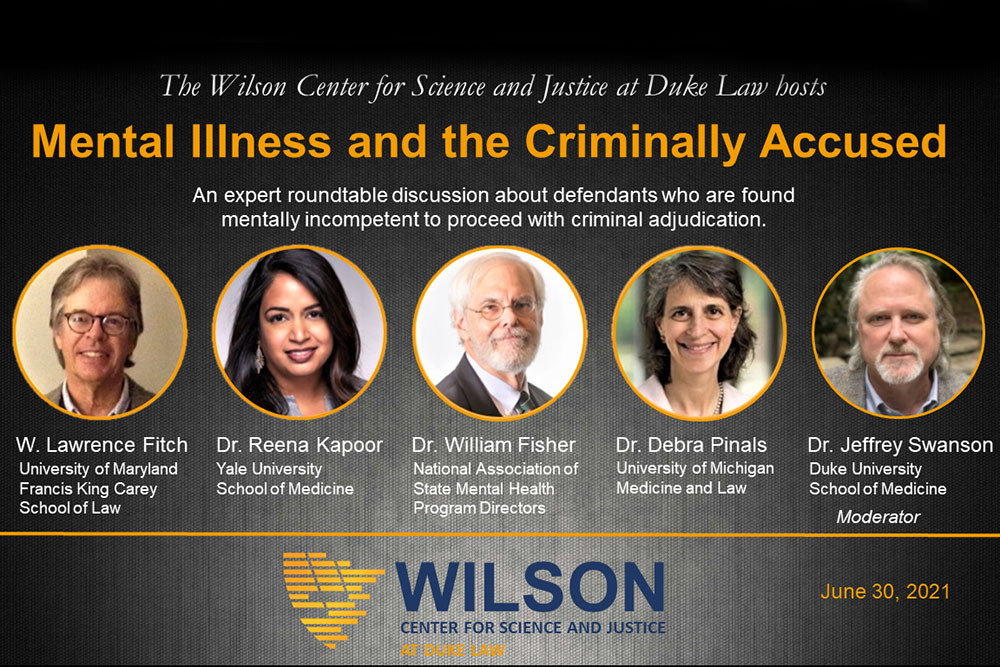 To try a defendant who is not mentally competent to take part in their defense is a denial of legal due process. While the state is not constitutionally compelled to prove a defendant is competent, they must allow them to attempt to prove they are incompetent to stand trial.

When a defendant is believed to be incompetent to stand trial, the court will order in-patient or outpatient treatment to attempt to restore competency. Typically, the court orders a defendant to complete a specific number of days in treatment and then reassess the individual. If they have restored the defendant to competency, the state can begin prosecution. Restoration to competency creates several challenges to the state mental health and legal systems.

The panelists discussed management challenges to legal and behavioral health systems, alternatives to reentry for the criminally accused, and how restoration policy varies from state to state.

Fitch opened the conversation by speaking about the importance of fairness and accuracy in deciding who is and is not capable of taking part in their defense.

“The US Supreme Court has laid out a standard that applies across the country: the defendant must have sufficient present ability to consult with his attorney with a reasonable degree of rational understanding,” he said, stressing the importance of the defendant’s understanding of the proceedings and ability to work with their attorney.

He explained, “that’s what competency is supposed to be about.”

Fitch also stated that having a mental illness does not automatically mean the accused is incompetent to stand trial. What matters is the person’s ability to do what is necessary to aid in their defense. Fitch noted that the same standard exists in all states because it is constitutionally based. However, some states in their statutes reference that incompetence derives from a mental disability.

Connecticut is a state with a progressive criminal justice system. As a result, they have no waitlists for competency restoration programs, plenty of hospital beds for treatment, and meaningful discharge planning, according to the second panelist, Dr. Reena Kapoor.

Dr. Kapoor believes competency restoration, even though it can be misused, has an essential purpose in mental health services for individuals involved with the criminal justice system. There are three critical things to consider in cases of obvious mental illness where a return to competency may not be appropriate; If the person shows obvious signs of mental illness, is willing to receive treatment, and has been charged with a non-violent offense, diversion is preferable to return to competency. For a return to competency, Connecticut looks for one or more of those elements to be missing.

“To me, competency restoration is a necessary part of the continuum of services that we provide, and rather than eliminating it, we want to focus on providing the right treatment for the right people,” Dr. Kapoor said.

Providing the proper treatment for the right people could ease the burden on psychiatric hospitals, where bed shortage is often a serious issue. Dr. William Fisher began his presentation with a comment on the increasing number of forensic patients in the hospitals.

“One of the general findings about forensic patients in psychiatric hospitals is that not only are the numbers of their patients increasing, but the increase is driven by people who are undergoing competency evaluations or have been referred for restorative purposes,” he said.

Dr. Fisher stated that Arizona and Minnesota experienced rises in competency admission rates of 2,500% and 517%, respectively. Nationally, from 2005 to 2016, there has been an increase of 85% among states who reported having more than zero competency admissions. When asked for an opinion why, some judges said they see more people with mental disabilities in their courts, and they dislike the idea of sending mentally impaired people to jail. They send them to a psychiatric hospital for a competency evaluation instead.

Others cited a lack of alternative dispositions in their communities as a likely reason for the increase as. Consequently, the hospitals fill because they are required to accept whomever the court sends them. Weighing humanitarian and fiscal expenses of competency restoration is a difficult task.

Dr. Pinals discussed the humanitarian need for restorative services and some challenges with them. For example, she said there is more clinical input in Massachusetts when ordering an evaluation, but the judges may still override the clinician’s judgement.

Dr. Pinals, who referred to herself as “The Wandering Forensic Psychiatrist” due to having worked in many states, believes enough is not done to prevent the revolving door of people with mental or substance abuse disorders from entering the competency system in the first place.

“We need to really be thinking in a much more nuanced manner and not treat every person who comes into the court so that we can preserve those hospital’s precious resource of hospital beds,” she concluded.

A video recording of the event can be accessed below.

Sean Bennett is a summer intern with the Wilson Center. He attends Indiana University of Pennsylvania, and is expected to graduate as part of the class of 2023.