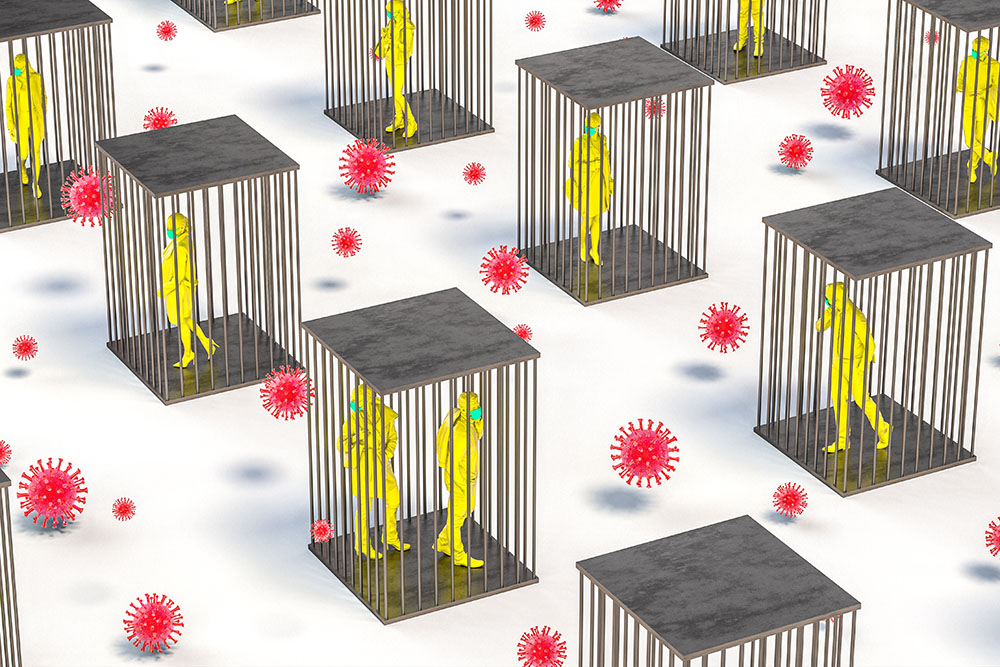 More than a year into the COVID-19 pandemic, 10,000+ North Carolina prison-incarcerated people have tested positive for the virus. In the last three months though, the North Carolina Department of Public Safety (NCDPS) has noted a striking drop in the number of cases in the prison system.

“Once people were able to get vaccinated, I think much of the fear went away,” said Ben Finholt, an attorney and member of the Wilson Center team, who brought 26 cases to court concerning early release due to COVID-19.

A welcome change, these improvements are largely credited to the mass vaccination program embraced by the NCDPS. In December, before vaccines were widely distributed in the United States, NCDPS started an information campaign “educating and informing the offender population” with distanced gatherings and discussions, intending to convince incarcerated people that the benefits of the vaccine outweigh any potential costs, said North Carolina Department of Public Safety spokesman John Bull.

“The more we learned about this virus the more we adapted,” Bull added. “For example, after many offenders tested positive, we realized we had a COVID-19 outbreak in Neuse Correctional. The decision was made to test all the prisoners and staff. We were shocked to discover that we had more than 450 inmates test positive. Almost 98% of people were asymptomatic. The rest of the world discovered what we did in April [2020].”

The incident he refers to at the Neuse Correctional Institution was, at the time, one of the country’s largest COVID-19 prison outbreaks. DPS maintained then and now that 98% of the over 330 positive cases at Neuse Correctional Institute were asymptomatic. The Center for Disease Control and Prevention (CDC) estimates that to the best of its knowledge, the highest asymptomatic rate for COVID-19 is 70%. NCDPS is unclear on how the data was collected regarding COVID-19 symptoms among those who tested positive.

“I do believe that DPS made improvements as the pandemic went along,” Finholt said. “However, they never seemed to fully grasp the threat. They never stopped transferring people, they did not enforce their own policies on the facility level, and they were not willing to admit that they couldn’t handle the problem.”

Meanwhile, more than 1,700 correctional officers left their jobs at North Carolina prisons in 2020, a nearly 14% increase in officer departures from the previous years. “What is important to understand is that for the prison system, the vacancy rate has been an issue now in North Carolina for at least a decade,” Bull explained. “And it’s not just North Carolina, it’s a significant challenge across the country. COVID-19 exacerbated the problem since many officers had to step down since many of [the officers] contracted or were in contact with someone who contracted the virus.”

The COVID Prison Project has found that besides general safety concerns, childcare and compensation are also significant factors contributing to officers leaving their jobs.

“From an operational standpoint, we constantly had to reassign staff to places where the COVID-19 numbers spiked,” added Bull. “The staff is very adaptable, and I never heard any complaints. People came together to help each other out. During this pandemic, I don’t think I heard a single complaint from a single officer about what was being done regarding safety measures for them and the offenders.”

Amid new uncertainty, North Carolina prisons are celebrating the reopening and expanding of opportunities for families to meet with incarcerated loved ones, albeit social distancing and “and other pandemic health and safety requirements” still applying to visitors, according to NCDPS. Official reports from NCDPS state that prison visitation was closed off during the period of early March, 2020 before the first offender officially tested positive for the virus.

“This was a precautionary measure taken in North Carolina,” said Bull. “Even so, we reopened visitation earlier compared to other prison systems nationwide in a way that preserved health and safety in the middle of this pandemic. We understand that [visitation] is important to offenders and their families. It’s remarkably important for offenders’ rehabilitation.”

With the rise of the new delta COVID variant, referred to as one of the most infectious respiratory diseases ever seen by the CDC director, “I could imagine that people [in prison] are worried again,” said Finholt.

Originally spotted in India and then the United Kingdom, the delta variant is thought to be far more transmissible than the original strain of coronavirus. The variant is about 60% more transmissible than the original, alpha variant, according to the CDC. Most people currently hospitalized for COVID-19 in the United States are those who are unvaccinated.

“The vaccine program has worked in the prison system to a remarkable degree. The vaccines are without doubt the reason why we have seen such a drop in COVID-19 cases,” said Bull.

Ruthie Kesri is an undergraduate student at Duke University working this summer with the Wilson Center for Science and Justice.