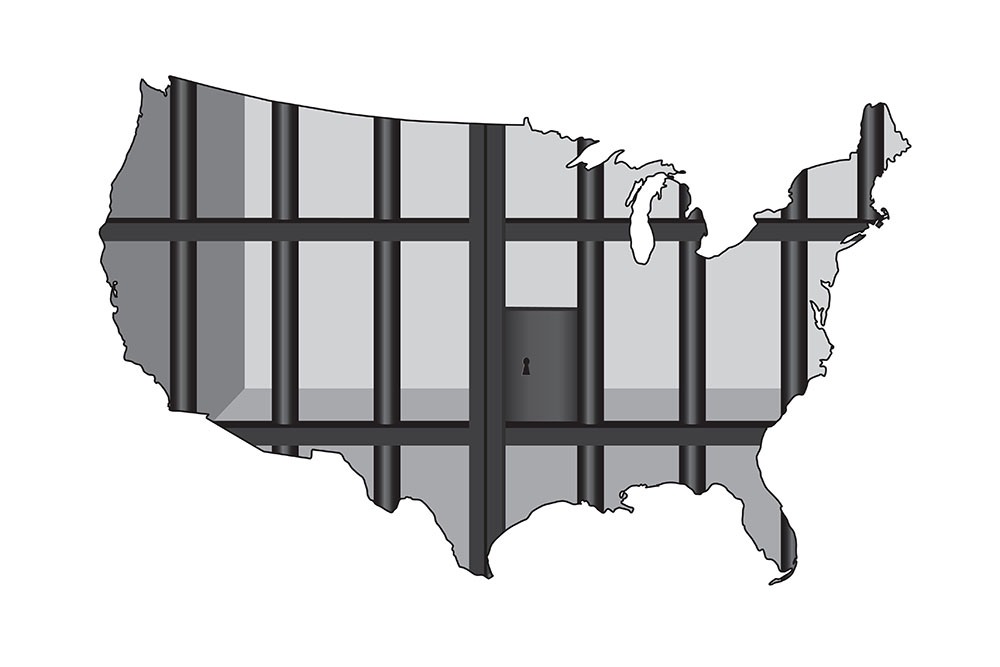 Danny R. Young won a city council seat with just two write-in votes, one from his wife and the other from his neighbor. The city of Anamosa, Iowa was split into four wards, with each one containing about 1400 residents. But in Young’s ward, over 1300 of them were from the Anamosa State Penitentiary – all of whom couldn’t vote. This gave the remaining 100 residents 25 times the voting power compared to the rest of the state.

Though Anamosa has since changed their districting system, the inflationary effect that resulted, best known as “prison gerrymandering,” still occurs all over the United States, and it is rooted in the Census. The Census Bureau follows the “usual residence rule,” which is defined as the place where a person lives and sleeps most of the time. As a result, incarcerated people are residents of where their prisons are located, rather than where they lived before incarceration.

Incarcerated people have been counted this way since 1790. At that time, the original purpose of the census was limited to congressional apportionment, dividing representation in the House according to each state’s relative population. However, over the last few decades, local and state governments have used this data for redistricting, so where people are counted matters. This distortion in voting occurs in nearly all states (barring Vermont and Maine) because they generally do not allow incarcerated people to vote.

“’Prison gerrymandering’ is often used, though the phrase is misleading,” argues Alaa Chaker in her comment for The Yale Law Journal. “Prison malapportionment concerns where individuals are counted, rather than the manipulation of the geographic boundaries themselves. It is thus an issue of malapportionment—which defies the one-person, one-vote principle—rather than one of districting and line-drawing.”

The problems involving this malapportionment are particularly severe in modern-day due to mass incarceration. Starting in the 1970s, the number of prisons being built grew significantly in order to accommodate the 500% prison population increase, and their construction skewed toward rural America, giving sparser regions more “residents.”

“This growth in population in rural prison towns is largely the result of relocated incarcerated populations, which disproportionately consisted of Black and Latinx people from urban communities,” says Chaker. “Thus, this period led to a shift in political power around the country: power was systematically transferred from racial minorities and urban centers to predominantly white, rural prison towns.”

Researchers often liken prison malapportionment to the infamous Three-Fifths Compromise, which increased the political clout of more rural states by counting three-fifths of their enslaved populations. In modern-day, incarcerated people have no say in their representation or ties to the local areas in which they are placed, yet they are used to continuously bolster the power of these communities.

“People whose loved ones are incarcerated will refer to it as ‘your body being used.’ You have no say in the political process,” says Wanda Bertram, communications strategist for the Prison Policy Initiative. “You are completely disenfranchised. You are being used to shore up the political power of a district that has nothing to do with you.”

Power and Priorities. An obvious issue that detracts support to end prison gerrymandering is the loss in political power for rural communities. Without the inflationary effect, people in rural areas would have voting power more equivalent to other districts. Further, redistricting means that local politicians would need to shift their political priorities and would need to widen their campaigns to gain political support.

Legislators in these communities have the incentive to keep a high proportion of people in their prisons to shore up power. They are more motivated to block criminal justice reform that would decrease prison populations, effectively continuing mass incarceration.

Funding. When it comes time to fill out the Census, the Bureau makes sure to emphasize that the data are used to determine the distribution of federal funding to states and local communities. Programs like Medicaid, the Supplemental Nutrition Assistance Program (SNAP), and the Federal Pell Grant program base their allocations on these population numbers.

Municipalities often stress the importance of each person filling out the Census, and they fear that not counting people in prison in their areas will make them miss out on extra-funding. However, this is false. Census data may be used to determine funding, but redistricting data has no effect on the formulas used for funding.

While it distorts local and state representation, prisons do not draw in federal or state funding for their host communities. States that passed laws ending prison gerrymandering prior to 2010 did not see any impacts on their funding, and those that passed laws after 2010 should not expect it either.

Students. Another point of contention is how this would affect college students. Would they be restricted from voting where their schools are located? Incarcerated people and students have fundamental differences in the way they interact with and live in the communities they are counted in.

“A lot of states have residency rules, defining ‘residence’ as a place where you have an intent to stay,” says Chaker. “Nobody who is incarcerated is intending to stay at the prison. They are being forcibly detained and put there against their will, and that’s why prison populations are unique amongst other transient populations.”

Students are there voluntarily, consuming local goods and services, voting in local elections, and sometimes staying in these areas post-graduation. They have a choice to participate in these aspects of their college-communities, and in most cases, these areas rely heavily on those students.

The Census has adjusted their “usual residence rule” multiple times for various groups. Before 1950, students were counted in their parent communities but were eventually given the opportunity to change their residences. Overseas military personnel were only counted in the Census starting in 1970, and even then, it was according to their “home of record,” or the address servicemembers provided upon entering military service. However, with the 2020 Census, they are now counted according to their onshore residence.

The Prison Policy Initiative has been on the forefront of this movement to end prison gerrymandering since 2001 through their Prison Gerrymandering Project. Their work evaluating the 2000 and 2010 census shows the severity of the skews at the local and state levels.

In Arizona, 64% of the state prison population comes from Maricopa County.

In Pennsylvania, where 40% of people incarcerated in the state are from Philadelphia, 99% of their prison cells are located outside the city.

In Wisconsin, one district in Juneau county has 80% of its population in prison, making 20 of their votes equivalent to 100 elsewhere.

Data from the 2020 Census is still being analyzed to see how prison gerrymandering currently affects representation in the US, and these results are set to be released in August and September 2021. In the meantime, scholars and advocates continue to look at a variety of solutions to combat this issue.

“The most efficient and best solution to this problem would be if the Census could stop counting incarcerated people as if they live in their prison cells, and that’s something that the Census has the power to do,” says Bertram. By using incarcerated peoples’ homes prior to incarceration as their residence, it more strongly represents the community ties that those individuals have and prevents the overrepresentation of rural communities.

Nevertheless, without action by the Census, there are two other avenues in which people choose to fight this issue: litigation and legislation.

Litigation. Fighting malapportionment in the courts has mainly looked to federal laws and statutes. In the U.S. Supreme Court case Reynolds v. Sims (1964), the primary holding was “The Equal Protection Clause requires substantially equal legislative representation for all citizens in a State regardless of where they reside.” Here, the Court defined the “one person, one vote” principle as a basic rule for representation in the U.S.

Considering the strong distortionary effect that gives some people comparatively more voting power, this principle served as the basis for the three federal challenges relevant to prison malapportionment. However, the restricted scope of these cases at the municipal and state levels, along with court requirement complications, limits the development of standards.

Focusing on state laws, however, could provide a strong path toward setting standards in state courts. “Most states have very favorable laws that would assist people who are going to challenge this practice,” argues Chaker. “Forty-six states in the country have some kind of law that recognizes residence – which is the key issue here – based on a standard of intent, so your residence is where you intend to be.”

The precedent set by the Census in counting incarcerated residents has caused a serious discrepancy between what is said in state statutes and what is done in practice. By pursuing court cases along these residency rules, cases would have an alternative route to fighting this issue and the opportunity to correct such a large inconsistency.

Legislation. So far, 11 states and 200+ rural counties have been successful in ending prison gerrymandering through legislation.

Current State Legislation to End Prison-Based Gerrymandering (as of June 30, 2021)

States typically take two routes to correct Census data: 1) collecting the home addresses of incarcerated people prior to imprisonment and using this for future redistricting purposes, or 2) only counting people in prison for the state population generally, rather than using their specific locations for redistricting.

Most recently New York and Maryland were able to end prison gerrymandering at both the local and state levels, but there is more variation amongst other states. For example, Tennessee passed a law in 2016 that no longer requires counties to use Census data but has yet to pass legislation on state legislative districts.

Local government legislation simply ignores prison populations when drawing district lines. Typically, those that live in these prison communities do not know about the distortion that happens in their areas or were unaware that they had the power to legally adjust their data. However, once the public gains awareness of it, they can successfully pass legislation to make districts fairer.

“I am very hopeful that before the 2030 Census, we will get a different Bureau that is actually able to make these changes, so we can end prison gerrymandering nationally,” said Bertram. “Until then, [the Prison Policy Initiative] is going to continue our fight, which is in the states and local legislatures.”

Annie Han is an undergraduate student at Duke University working this summer with the Wilson Center for Science and Justice.