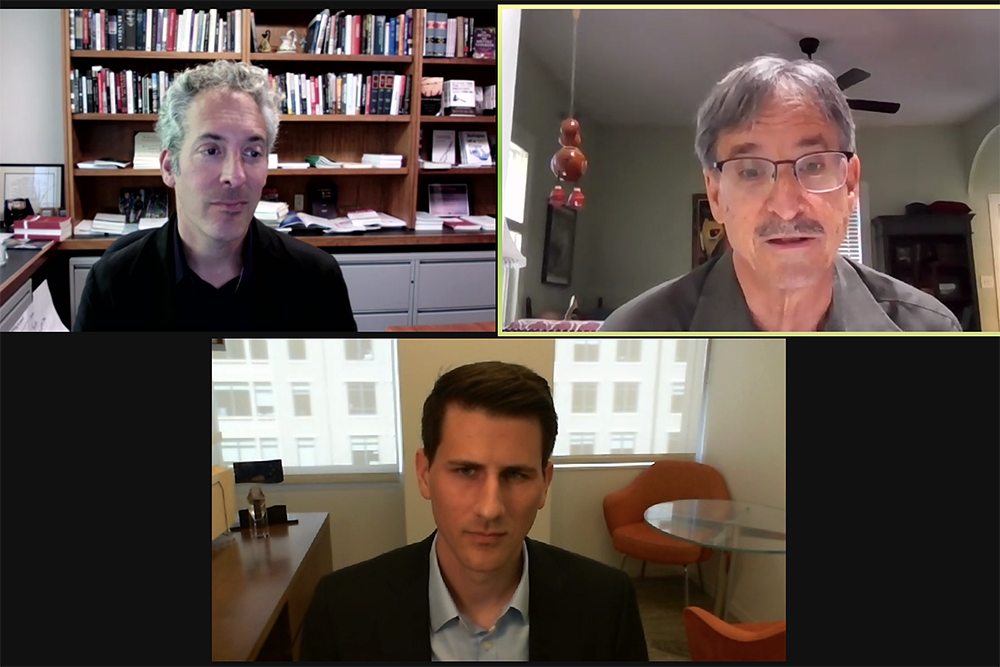 In 1983, Red Springs, North Carolina, 19-year-old Henry McCollum and 15-year-old Leon Brown were wrongfully arrested for the rape and murder of a young Sabrina Buie. With the teens’ intellectual disabilities (McCollum’s IQ being 51 and Brown’s at 49) and the police’s fabricated evidence, McCollum and Brown were extremely vulnerable to coercion, leading them to falsely confess to the crime. Brown then became the youngest person in North Carolina to receive the death penalty at only 16 years old.

After 31 years, new DNA evidence exonerated McCollum and Brown in 2014, and they filed a wrongful-conviction suit against the officers responsible. In May 2021, a jury-verdict awarded the half-brothers $75 million for the gross misconduct that landed them in prison. To date, it is the largest settlement for wrongful conviction in U.S. history.

In September, the Wilson Center hosted Duke Law alum David Maxwell, an attorney at Hogan Lovells, and Ken Rose, the former director of the Center for Death Penalty Litigation, to discuss their roles in the case and what they learned from it. The Center’s Director Brandon Garrett moderated the event.

Rose was initially contacted about this case for his previous experience in post-conviction death-penalty cases, and he went on to serve as counsel for the exoneration case in 2014. During the event, he gave more context to the investigation and what happened during trial.

The police started investigating McCollum after a local girl told the police about rumors of his involvement in Sabrina’s murder and several others. It was not revealed until the 2014 trial that the girl admitted to fabricating these stories a week after reporting them. She had, in fact, never heard anything about McCollum being involved and merely thought he acted strange.

For four hours, the police questioned him.

“They said, ‘We have a witness that put you there – that said you did it,’” Rose described. “They yelled at Henry that he would face the death penalty. They used racial epithets. Then, they said, ‘Also, well ya know, just tell us what happened, and you can go.’ They said that several times. Finally, Henry broke down.”

19-year-old McCollum falsely confessed to participating in the crime, using the same, very detailed information the police fed him throughout the investigation. He also identified four other names of people he knew that lived in the area, including Leon Brown. The other people implicated either had detailed alibis or were living in completely different areas.

Throughout McCollum’s and Brown’s cases, the courts analyzed the validity of the confessions. Neuropsychologists testified that McCollum would not have been able to understand the Miranda warning, or the language used in the confession. Further testing showed that he had brain damage along with his intellectual disability, placing his ability to comprehend language at an extremely low level.

Over the years, DNA samples were taken from McCollum and Brown, and they never matched the evidence found at the crime scene. In 2010, the North Carolina Innocence Inquiry Commission got involved and requested the DNA be compared to other profiles in the state police database. They found a match: Roscoe Artis, a serial rapist and murderer already serving life in prison. He had confessed to the rape and murder of 18-year-old Joann Brockman almost a month after Buie’s death. Both girls had been killed by the same methods.

The Innocence Inquiry Commission proceeded to investigate for another four years, exploring every available piece of physical evidence, including interviews of Artis and other inmates – all of which the Red Springs Police Department had but withheld from the defense.

With this new evidence, Robeson County District Attorney Johnson Britt and a Superior Court Judge agreed that there was no evidence against either McCollum or Brown and that they were likely innocent. Both were released 2014 after serving 31 years in prison.

Maxwell joined the wrongful conviction case, pro bono, when Hogan Lovells took over the case in 2018. He discussed new points brought up during the civil rights case, where McCollum and Brown had the burden of proving law enforcement’s violation of McCollum and Brown’s rights.

McCollum and Brown’s counsel deposed the officers that worked the case. They retained experts, such as Richard Leo — one of the leading experts in the world on police interrogation practices, the impact of Miranda, psychological coercion, false confessions, and the wrongful conviction of the innocent — to speak about the behaviors of individuals with intellectual disabilities.

They also established damages for the physical and emotional harm the two men went through over the years.

“It’s just hard to imagine the kind of depth of harm for McCollum,” said Rose. “He was severely depressed, he was. Every time there was an execution, they had to take him out and put him in a day room because he was suicidal. He was made a target by some inmates because of the crime and the fact that it was a little girl who was brutally murdered.”

As they served their sentence, McCollum and Brown suffered extreme trauma and isolation, awaiting a punishment they never deserved, according to Maxwell. Family members passed away, and they had to see fellow incarcerated people be executed over the years.

“The most powerful part of the trial was when Henry and Leon testified, describing their experiences firsthand,” said Maxwell. “For us, as attorneys, it was just incredible to watch their courage, in overcoming their fears to really be, I think, their best advocates for them, maybe in the whole trial.”

The jury ultimately awarded McCollum and Brown $1 million for each year they were in prison, and an additional $13 million in punitive damages. The two defendants from the Robeson County Sheriff’s Office also settled the case against them for $9 million that same day. Despite the financial security they had received, it was the final verdict that was most important to them.

“They were just so focused on having somebody decide and hear their story and believe them, so when the jury did come back in and hand in their verdict, that’s when, you know, you could see the real joy in their eyes,” concluded Maxwell.