Wilson Center Director Brandon Garrett’s work was cited in March and April on an episodes of Last Week Tonight with John Oliver about wrongful convictions and police interrogations. You can watch the episodes below.

Garrett: The use of large DNA databases in criminal investigations can be counterproductive due to the inclusion of innocent people | New York Times

“There’s this perception that the bigger the database, the better for public safety — and that hasn’t been borne out,” said Brandon L. Garrett, a law professor at Duke University who has extensively studied the use of DNA evidence. “The more innocent people’s stuff you have in these databases, the more its crime-fighting ability is harmed.”

Brandon Garrett and Sandra Guerra Thompson have now served for one-and-a-half years as court-appointed monitors in the ODonnell case. They write to describe the litigation and to offer their perspective on how the misdemeanor bail system in Harris County has changed since that litigation began. The ODonnell Consent Decree that resulted from the lawsuit has the potential to set an important model for pretrial reform. Garrett and Thompson describe what that consent decree provides and the work to come.

Racial justice advocates and legal experts on Tuesday hailed the murder conviction of former Minneapolis Police Officer Derek Chauvin in the death of George Floyd, expressing hopes the case could spur broader police reforms and help crack the “blue wall of silence” often adhered to by police when one of their own commits a crime. While this was a landmark policing trial, Garrett said the real significance would lie in whether it brought about enactment of broader police reforms at the federal and state level.

Virginia stands out from other states that have done away with capital punishment in terms of just how many executions it has carried out, according to Brandon Garrett, a professor of law at Duke University who studies and has written extensively about the death penalty. He said the state was a harbinger of both the death penalty’s rise in the 1970s and ’80s and its decline in more recent years. 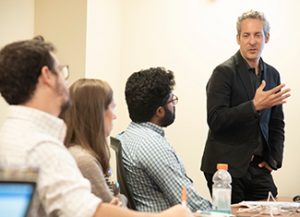 With the launch of the Duke Center for Science and Justice, Duke Law School is betting that empirical, interdisciplinary research can produce evidence-based reforms in the criminal justice system. In this in-depth profile of the center, Duke Law Magazine explores how Professor Brandon Garrett (right) and his team of researchers and collaborators are using data to find ways to improve on criminal justice reform.